NB: Exceptionally large specimens can be found in all species of crocodilian.

The Nile crocodile was long thought to be the ‘big’ croc species found across Africa. Only recently has it become apparent through genetic analysis that the population to the West and into Central Africa is actually a different species: the West African Crocodile. This species also attains a large size and has a very similar lifestyle to the Nile crocodile. This species, interestingly, is the one that is found in several of the sacred pools in Africa where the crocodiles are worshipped by local peoples. Similarly, this species was more likely to be the one preserved in a mummified state by the ancient Egyptians and their crocodile culture! It has a different number of chromosomes to the Nile crocodile, so the separation of the two species was warranted. 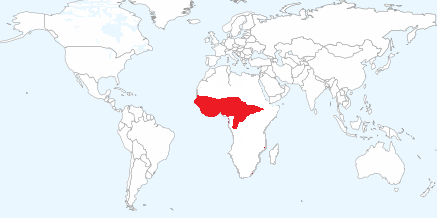 Lakes, rivers and freshwater swamps, although they may also be found in brackish swamps in some areas.

As with Nile crocodiles whose diet has been especially well-studied, the species exhibits the typical shift from invertebrates when young to predominantly vertebrate prey as they grow larger.

Since the species has only recently been ‘split’ from the Nile crocodile, the official status of Crocodylus suchus has not yet been determined. Specific survey data for that species is being collated along with the threats and precise locality information to accurately define its status. Whilst the Nile crocodile – a widespread and numerous species albeit locally depleted – is Lower Risk, the West African crocodile may well be Vulnerable or Endangered.