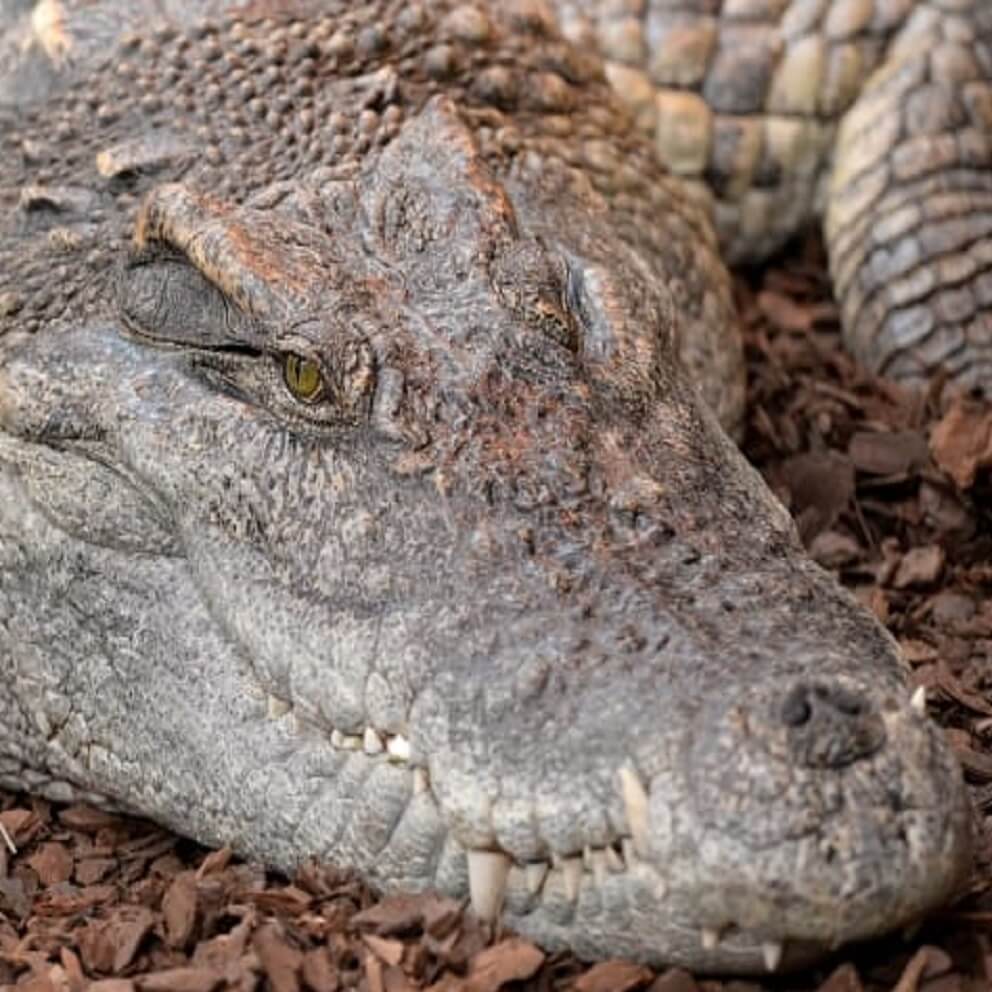 The Siamese crocodile is a freshwater crocodile native to Asia. Little is known about this critically endangered species, which has already been eradicated from many regions. We do know that in the wild they prefer slow moving waters like swamps, rivers, and lakes. Both male and female Siamese crocodiles look after newly hatched babies, and uniquely, this species is known to live together as a family unit.

The Siamese crocodile is classified as Lower Risk/conservation dependent on the IUCN Red List of Threatened Species.

The Siamese crocodile historically occurred over much of mainland Southeast Asia as well as parts of Indonesia. Its current range is greatly diminished and fragmented. Extant populations are in Cambodia, Indonesia, Lao PDR, Thailand and Viet Nam. In Viet Nam, wild populations are possibly extirpated, the first range nation where this has occurred, although a reintroduction programme has been implemented.

Siamese crocodiles occur in a wide range of lowland freshwater habitats, including slow-moving rivers and streams, lakes, marshes and swamps. During the wet season, individuals disperse across ﬂooded landscapes (one radio-tracked individual in Cambodia moved up to 25 km before returning to a dry season site).

Similar to many other crocodilians, Siamese crocodiles feed on a wide variety of prey such as invertebrates, frogs, reptiles, birds and mammals, including carrion. Adults feed mainly on fish, but also eat amphibians, reptiles and small mammals.

Siamese crocodiles are among the most threatened crocodilians. In 1992 it was reported as virtually extinct in the wild and in 1996 was accorded the IUCN Red List status of ‘Critically Endangered’. This status remains unchanged.

Field surveys, nearly all conducted since 2000, have confirmed that extant populations persist, but that all are severely diminished and fragmented. Over the past decade new information on the ecology of the species has been documented, although Siamese crocodiles remain one of the least known crocodilians.

Commercial hunting for the skin trade and collection of live animals to stock crocodile farms, in the mid- and late-twentieth century respectively, are considered to be the principal causes for its decline. Current threats include illegal collection of eggs, juveniles and adults, habitat loss, incidental capture with fishing gear, and the vulnerability of extant populations due to their small size.

Most conservation efforts for the Siamese crocodile were initiated in the past decade and are relatively recent. Conservation priorities have been identified and a management plan to protect breeding sites was prepared. Community workshops were held in 2006 and 2007 to document local knowledge of crocodiles.

In Thailand, a re-introduction programme was initiated by the Royal Thai Forest Service and Crocodile Management Association of Thailand, with 20 crocodiles released in Pang Sida National Park in 2005 and 2006. Few crocodiles were detected during subsequent monitoring and further releases are being considered. Severe flooding in Thailand in 2011 hindered the implementation of some re-introduction plans. In Viet Nam, 60 captive individuals were released in Cat Tien National Park between 2001 and 2004 and the population has been irregularly monitored since then. The most recent surveys (2010-2011) confirmed that the population has increased in size, but that crocodiles continue to be hunted by local residents.

The large captive populations of Siamese crocodiles held on farms represent a potential source for re-introduction programs, and farms in Thailand and Viet Nam have donated crocodiles for this purpose. Genetically pure crocodiles have been found in captive holdings in Cambodia.

Current and on-going threats include the illegal collection of eggs and crocodiles, habitat loss and degradation, and incidental capture/drowning in ﬁshing gear. In Cambodia, most river systems with extant Siamese crocodiles are targeted for large-scale hydroelectric dams. Construction of some of these dams has already begun and has resulted in the loss of breeding habitat and increased collection and killing of crocodiles.

On the basis of limited data, the global wild population of the Siamese crocodile may comprise fewer than 1,000 mature individuals.

We currently have two pairs of Siamese crocodiles at the zoo, Hugo and Rebecca and the smaller Scar and Hayley.

With less than 1,000 mature adults left in the wild – some reports suggesting as few as 500, this critically endangered species is at even greater risk of hybridisation than other crocodilian species. In March 2013, following DNA testing, we received excellent news that all four individuals at Crocodiles of the World are genetically pure Siamese crocodiles.

Furthermore in May 2013, our smaller adult pair built an impressive nest-mound and laid a small clutch of 6 eggs. This was the first breeding attempt of our critically endangered Siamese crocodiles and the first instance of Siamese crocodile eggs being laid at a UK zoo. Sadly, on this occasion the eggs did not hatch, but we have high hopes that both pairs will help with future breeding efforts.