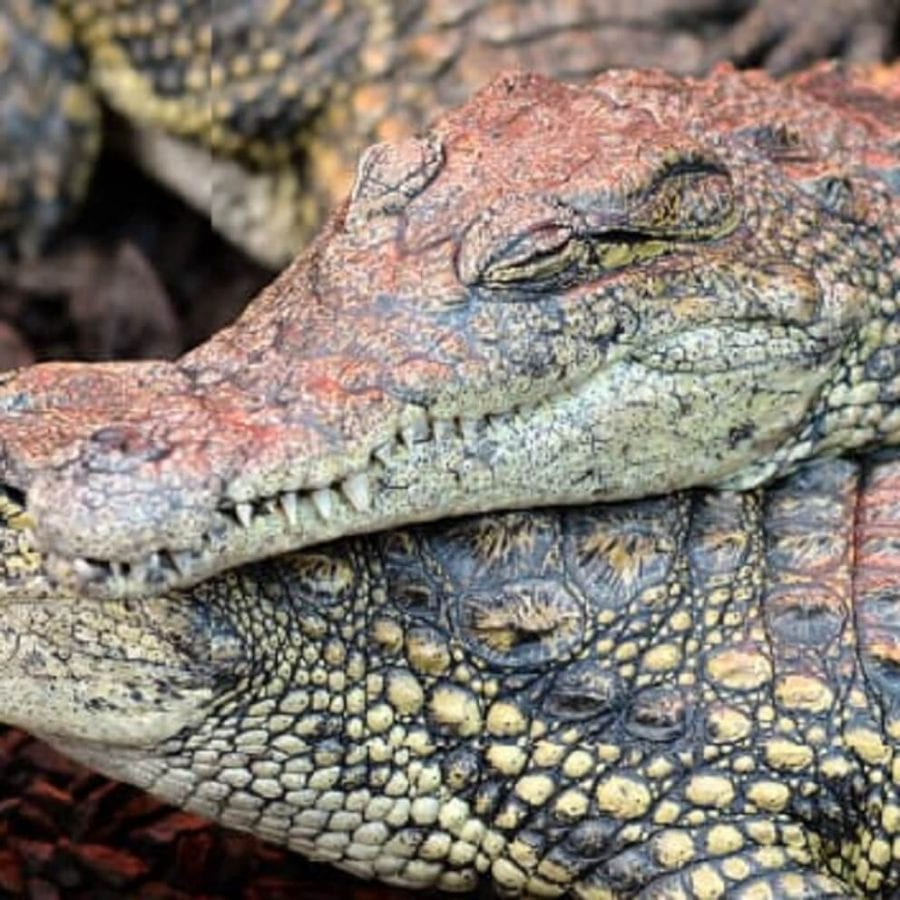 The Nile crocodile is classified as Lower Risk/least concern on the IUCN Red List of Threatened Species.

It is listed on CITES Appendix I [except the populations of Botswana, Egypt, Ethiopia, Kenya, Madagascar, Malawi, Mozambique, Namibia, South Africa, Uganda, the United Republic of Tanzania (subject to an annual export quota of no more than 1,600 wild specimens including hunting trophies, in addition to ranched specimens), Zambia and Zimbabwe, which are included in Appendix II].

The Nile crocodile inhabits a wide range of aquatic habitats, including large freshwater lakes, rivers, freshwater swamps, coastal estuaries and mangrove swamps. They have been known to enter the sea in some areas, with one individual having been seen 11 kilometres (6.8 miles) off St Lucia Bay in 1917. In Madagascar, they have adapted to living in caves.

The Nile crocodile is an opportunistic apex predator and a very aggressive species of crocodile, known for its voracious appetite.

The size of the prey depends on mostly the size of the crocodile. Young hatchlings generally feed on smaller prey, preferring small fish, frogs, insects and small aquatic invertebrates before taking on larger fish, amphibians and small reptiles. Juveniles and sub adults take a wider variety of prey with additions such as birds, turtles, snakes, Nile monitors and small to mid-sized mammals, such as various monkeys, duikers, rodents, mongoose, hares, pangolins, porcupines, bats, dik-dik, and other small ungulates up to the size of a Thomson’s gazelle. Various birds including, storks, small wading birds, waterfowl, fish eagles and even small swift flying birds may be snatched.

Adults are apex predators and prey upon various birds, reptiles and mammals, in addition to prey consumed also by the younger specimens. Large birds such as ostrich, and large snakes such pythons are among non-mammalian prey. Among the mammals, the bulk of the prey is antelopes. In general, gazelles, waterbuck, bushbuck, impala, sitatunga, lechwe, eland, kudu, gemsbok, sable antelope and wildebeest are among the most common prey. Zebras, warthogs and baboons are also readily taken. The largest adults sometimes take on larger prey such as giraffe, Cape buffalo, young hippos, and young elephants.

Cooperative hunting and pack hunting has been observed in populations of Nile crocodiles living in large bodies of water, or in very high traffic areas of rivers and lakes.

Hunted close to extinction in the 1940s through the 1960s, conservation measures have helped populations of Nile crocodiles recover in most areas. In some African countries, Nile crocodiles are protected legally. Threats to the population include habitat destruction, pollution and hunting by humans.

The Nile crocodile is the top predator in its environment, and is responsible for keeping in check the population of species such as the barbel catfish, a predator that can overeat fish populations on which other species, like birds, depend. The Nile crocodile also consumes dead animals that would otherwise pollute the waters. Nile crocodiles play an extremely important role in stabilising the African food chain.

We are home to a large group of some 32 juvenile Nile crocodiles.

Our Nile crocodiles came to us in July 2012 from La Ferme aux Crocodiles in Pierrelatte, France.

Some of the more noticeable members of the group include: Turbo – so named for his speed and uncanny knack of getting to food first, Sneaky – as the name suggests, a smaller and more elusive individual, Tiny – who was initially separated from the main group after falling behind in development, but is happily now in good physical condition and will soon by entirely undeserving of his nickname, and Lucy – a very intelligent individual who has been trained to follow the instructions of Shaun and the zookeeper team.