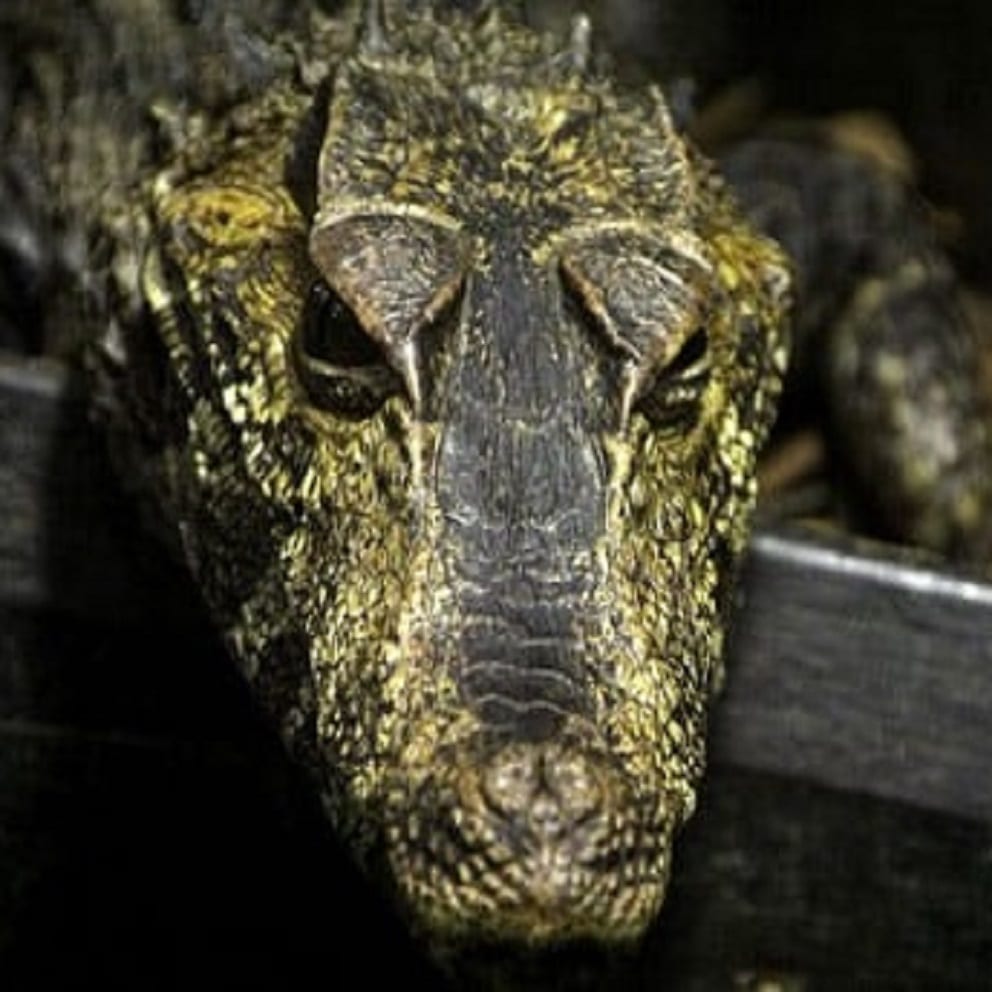 Schneider’s dwarf caiman, also known as smooth-fronted caiman or Schneider’s smooth-fronted caiman, is slightly larger than its close relative, Cuvier’s dwarf caiman. Males reach an adult length of 1.8 metres (5.9 feet), with the largest recorded specimen being 2.6 metres (8.5 feet). Its preferred habitat is freshwater river systems, principally shallower streams, but adults often spend much of their time in burrows away from water. This caiman walks with a distinctive head-raised posture.

The smooth-fronted caiman is native to the Amazon and Orinoco Basins in South America and is found in Bolivia, Brazil, Colombia, Ecuador, French Guiana, Guyana, Peru, Suriname, and Venezuela. It inhabits small streams in forested areas where in some cases; the water may be insufficiently deep for it to completely submerge itself. It is seldom seen in open areas and does not usually bask in the sun, even in captivity. This species can also be found in relatively high altitudes exceeding 1000m above sea level in small stream habitats.

It has been shown that the diet of caimans in the wild is dependant upon their habitat preferences. They are reported to forage from burrows at night, often near water, but also in the surrounding forest within their territories – which can range for several kilometres.

Juveniles tend to eat a greater proportion of fish than other caiman species. Mature adults include a larger proportion of terrestrial vertebrates in their diet, such as snakes and mammals.

Subsistence hunting has been of sufficiently low intensity to avoid damaging populations. Major present and future threats include habitat destruction, and pollution associated with gold mining activities. Fortunately, this species is not extensively hunted because its skin contains many bony scutes, which make it of little use for leather.

Over 1,000,000 individuals are estimated to remain in the wild, and the species is rated by the IUCN Red List of Threatened Species as being of “Least Concern”.

We are currently home to two Schneider’s dwarf caimans.

On display is our male, Trigger. Trigger is possibly our most photographed animal! He cooperates by regularly posing right near the underwater viewing window, making it easy for visitors to take a selfie with this handsome caiman. The female is kept off display, since this rather secretive species can be intolerant of other animals (including each other) unless in a larger, more complex habitat.

We do hope to breed the species one day, contributing to the knowledge of this secretive crocodilian. This will require a much larger exhibit, so in adopting this species (see below) you will be contributing to this huge project!

Adopt an animal at Crocodiles of the World including our Schneider’s dwarf caiman. Click here for information