Crocodiles of the World started as one man’s dream to make the world a kinder, more compassionate place for crocodiles, especially those species listed as endangered in the wild. Founded in 2011 by crocodile conservationist, Shaun Foggett, the zoo started life on a small site, Crawley Mill in Witney, Oxfordshire and mainly opened at weekends. As interest grew, so did the opening hours with schools visits and birthday parties too. With increasing visitor numbers and a growing population of crocodiles, the zoo urgently needed to move to a much larger site and in February 2014 the zoo and all it’s residents relocated to a new site in Brize Norton (the former Foxbury Farm site).

Crocodiles of the World is the UK’s only crocodile zoo and is currently home to more than 150 crocodiles representing 19 of the 24 different species including crocodiles, alligators and caimans, as well as other reptiles. Home to one of the widest crocodile collections in the world, the zoo is now able to contribute to vital conservation and research work to help secure the future of these incredible animals. 2021 marks the zoo’s 10th birthday!

Crocodiles of the World Foundation

On August 8, 2013, the Foundation received formal confirmation of its charity status from the Charity Commission, the regulator for charities in England and Wales. This enables the zoo to continue with its commitment to advancing crocodilian conservation and promoting awareness of environmental issues affecting crocodiles.

To find out more about the Foundation and our conservation work click here. 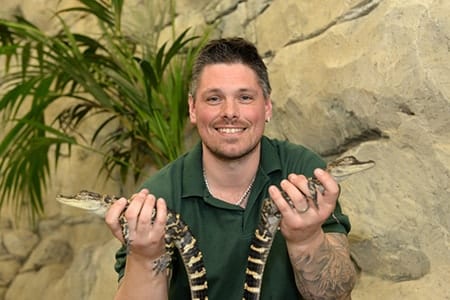 The journey of ‘the Croc Man’

Shaun became known as ‘The Croc Man’ following a one-off documentary shown on the Discovery Channel and later that year a mini-series was made by channel 5, following his journey to open Crocodiles of the World.

Prior to opening the zoo Shaun studied and learnt about crocodiles through his own personal collection; by 2009 his collection had reached 21, which was when he knew he had to re-locate them! Setting up the zoo has taken personal sacrifice, including leaving the family building business and selling his family home.

It was worth the risk. Shaun’s expertise as a crocodile conservationist and expert crocodile handler means he often advises and supports other zoos, as well as the many research and conservation projects that the animals at the zoo contribute towards.

A new incredible journey is still only just beginning…

The zoo continues to grow and has celebrated the arrival of many new animals, from the breeding of critically endangered Siamese crocodiles to the arrival of a Komodo Dragon during the zoo.

Here’s just a few highlights and achievements in the life of the zoo so far: