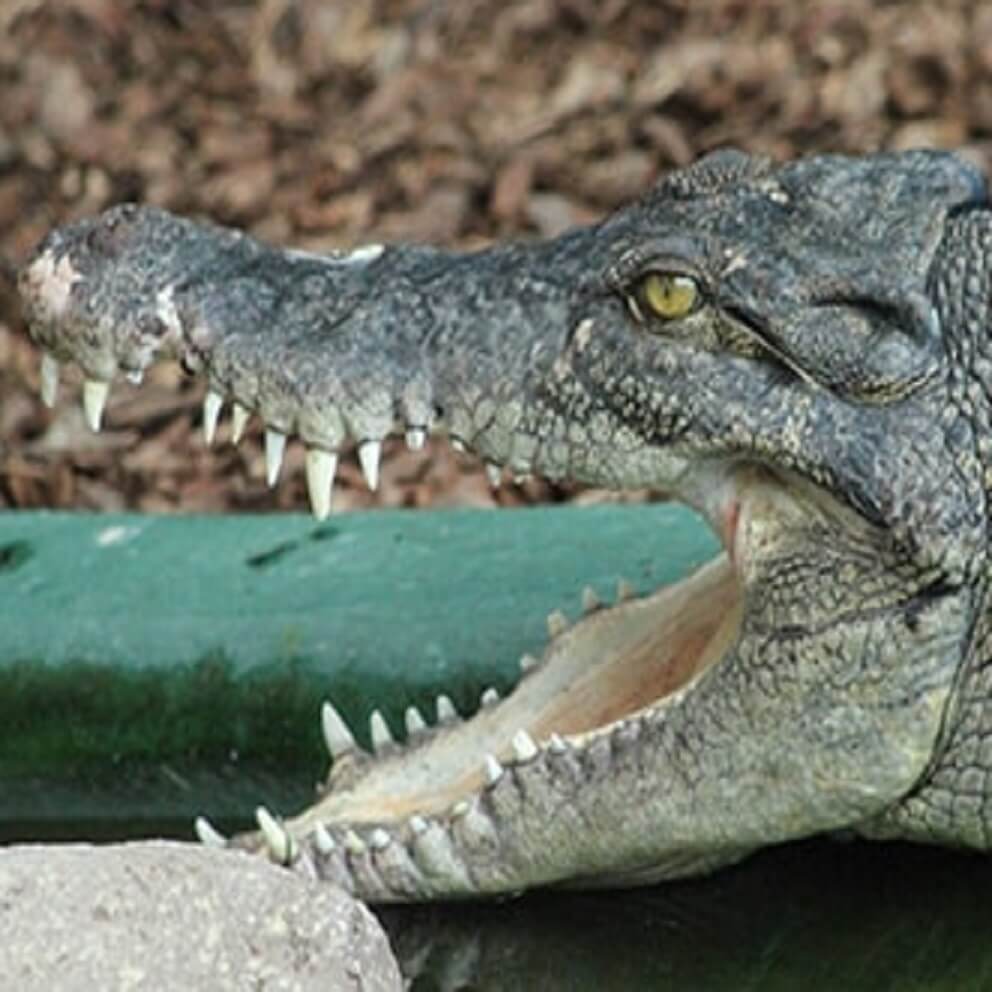 The saltwater crocodile, also known as saltie, estuarine or Indo-Pacific crocodile, is the largest of all living reptiles, as well as the largest terrestrial predator in the world. Adult males can reach sizes of up to 6.7 metres (22 feet) and weigh over 1000kg (2,200 lb), although few exceed 5 metres (16.4 feet) in length. As its name implies, this species can live in salt water, but usually resides in mangrove swamps, estuaries, deltas, lagoons, and lower stretches of rivers. Due to their formidable size and wide geographical range, saltwater crocodiles are considered to be one of the most dangerous animals on earth.

The saltwater crocodile is classified as Lower Risk/least concern on the IUCN Red List of Threatened Species.

It is listed on CITES Appendix I (except the populations of Australia, Indonesia and Papua New Guinea, which are included in Appendix II). 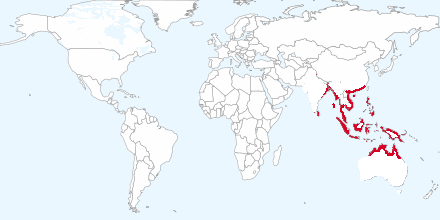 The saltwater crocodile inhabits large shallow bodies of freshwater or saltwater. The species prefers warm, tropical regions of the earth. It usually spends the wet season in freshwater rivers, streams and swamps and before migrating downstream as water becomes more and more scarce with the onset of the dry season.

Since this species can travel long distances at sea it sometimes travels along the coasts of other countries and has for instance been reported in the Sea of Japan, Fiji and Iwo Jima. The ability of adult saltwater crocodiles to travel across seas explains its wide distribution and why it is present on such remote islands as Vanuatu, Palau and the Solomon Islands.

The saltwater crocodile is one of the three crocodilians found in India, the other two being the more widespread mugger crocodile and the gharial.

Saltwater crocodiles were once present throughout the island of Sri Lanka but remain mostly within protected areas such as Yala National Park, which also has a large population of mugger crocodiles.

The saltwater crocodile is an apex predator capable of catching prey on dry land as well as in the water. Juveniles take smaller items such as insects, amphibians, crustaceans and fish, while adults also take reptiles, birds and mammals. They can also attack and kill domestic livestock and even humans.

The larger the animal grows, the greater the variety of animals it includes in its diet, although relatively small prey is taken even as an adult. The largest prey taken by saltwater crocodiles are water buffalos and gaurs, which can weigh over a ton. Taking such prey is normally only attempted by large adult males. Despite being capable of overpowering virtually any animal that ventures close enough, comparatively small prey make up an important part of the diet even for big crocodiles.

Stones and pebbles may also be ingested, the purpose of which remains unclear, whether to help grind food (digestion) or to aid buoyancy.

Saltwater crocodiles have the strongest bite of any animal today and a large adult male can crush a full-grown water buffalo’s skull between its jaws. A 5.2 metre (17 feet)-long saltwater crocodile has been confirmed as having the highest bite force ever recorded for an animal in a laboratory setting, with a bite force value of 16,000 N (3,700 psi). Fortunately for us when we need to restrain any crocodile, the jaws can easily be secured with rope, bands or tape. As with all animals, the power is required in closing those jaws, not in opening them, and the long jaws of crocodilians gives us a mechanical advantage in securing them!

The key threat is destruction or disturbance of habitat, along with a low tolerance for these large predatory animals by local people. Illegal killing still occurs in some territories.

Crocodile farming – especially when tied to a ranching model based around collection of wild crocodile eggs – has been a significant aid in the comeback of crocodile populations in Australia and New Guinea. Saltwater crocodile populations in countries that lack these solid models and have poor enforcement of conservation laws have not been able to bounce back to quite the same extent.

The large adult size of salties, the movement of sub-adult males to find their own territories, and an increasing human population in many areas has seen a significant increase in the number of conflict incidents between crocs and humans. Public education programs, problem crocodile teams to relocate crocs from areas used by people, and regular monitoring of crocodile populations are essential components to crocodile management.

Australia’s saltwater crocodile population is the most secure for the long-term survival of the species.

On Wednesday, 14 May 2014, three adult female saltwater crocodiles arrived at Crocodiles of the World. The animals came from Alligator Bay, Normandy, France. Measuring between 2.3 metres (7.5 feet) and 2.5 metres (8.2 feet), the salties arrived at the zoo in good physical health and, despite reportedly being very shy, have already started to become acclimated to their new surroundings and to experience life at Crocodiles of the World. In 2020, one of the females was sent to another UK zoo.

Our salties are popular with our VIP experience guests, who are often able to feed these animals via the specially-built platform within the enclosure.